Seven teams from across Scotland took part with two groups competing in a round robin format with the winners of each group playing each other to decide the winners.

History will look back and note that Tayside Dynamo and Clyde Alba contested the final again, however this does not give an accurate description of the raised level and standard of play by all the other competing teams throughout the day, with Tayside Dynamo only scraping through to the final after a penalty shoot out against the South Ayrshire Tigers.

Alas the final was again a very hard fought encounter with these two auld rivals, and yet again neither side could break down their opponenets defences. The game finished 0-0 and was decided on penalties, with Tayside Dynamo coming out on top.

Congratulations to both Tayside Dynamo and Clyde Alba who demonstrated true sportsmanship, although the final was a real tough encounter full of passion and determination, there was an abundance of respect before, during and after the game.

Thanks again to Dundee Disability Sport for facilitating the Discovery Games and allowing those who are differently abled to participate in all manner of sports.

Lastly, a huge thank you to our friends (Donal, Mark & Gerry) from The Association of Irish Powerchair Football (AIPF) for attending and mentoring our referreeing throughout the day, a considerable amount of progress has been made and we look forward to meeting up again in the near future.

Donal Byrne, Secretary, (AIPF) noted, “It was a great pleasure to visit the SPFA League Cup in Dundee and to see the progression in all the teams since my last visit two years ago. I hope that bringing our two experienced referees will lead to further progression in the months ahead and to further development and sharing of ideas and exchanges between our two countries.” 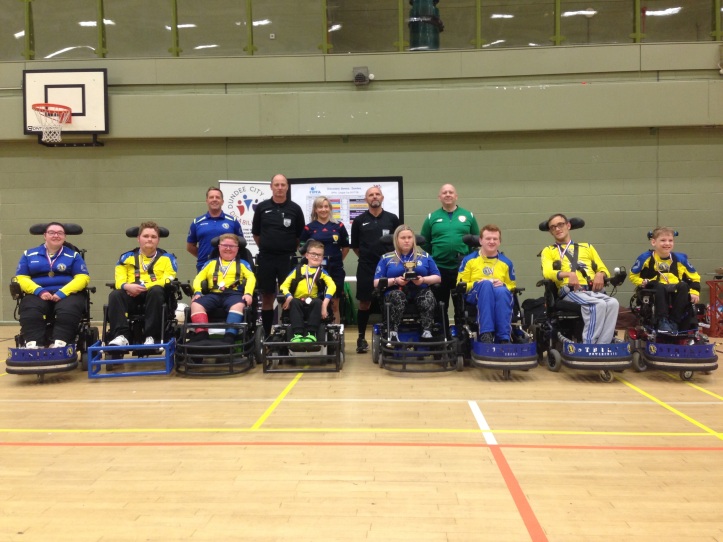